Community: Fight For The Pillow Fort 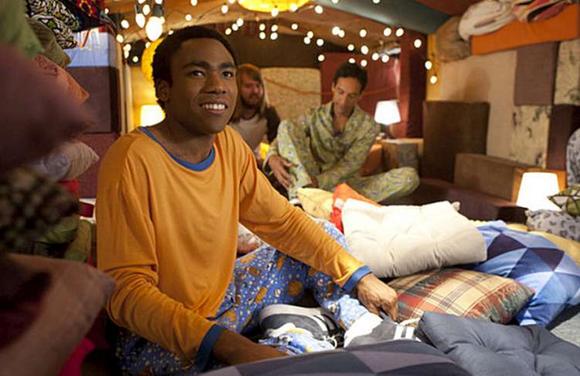 Last week saw the students of Greendale Community College embark on a record-breaking task to build the world’s largest pillow and blanket fort.  However, the leaders of the venture, best friends Troy and Abed, were split by the scheming Vice Dean (John Goodman) and formed two rival forts, Blanketsburg and Pillowtown.

In case the names didn’t make it obvious, they were arguing over the prestige of pillow forts vs. blanket forts.  What followed was a night of carnage, savagery and brutality too despicable to recap…just kidding!  There was a big pillow fight and a bunch of weird jokes.

As a television show, “Community” has always been at its best when approaching the far reaches of crazy, letting the actors’ bizarre tendencies and the script’s quirky hijinks fly into overdrive.  Last night, they set the controls straight for the heart of absurd.

The show framed the battle between Blanketsburg (the blanket fort) and Pillowtown (the pillow fort) in pseudo-war documentary fashion.  Each character fell into their own appropriate role – Troy and Amed were the commanders of Blanketsburg and Pillowtown, respectively, Annie was the Florence Nightingale, Shirley and Pierce (Chevy Chase) became super soldiers, Jeff used his powerful faux-political rhetoric to rile up both sides in a “Ferris Buellerian attempt to delay schoolwork,” and Britta, the insufferable liberal arts major, tried to heroically capture the brutality of pillow war on film, but sadly even she ended up caught in the tragedy. (Best Quote: “just because something is in black and white, doesn’t mean it’s good.”)

Ultimately, after the Guinness World Records team dubbed the battle “the world’s biggest mistake” and the rest of the student body got bored and went on with their lives, Troy and Abed made up and donned their “magical friendship hats” as a sign of peace.  The great war ended, and Greendale Community College was left in peace.

Last night’s episode was both touching and comical with an emotional punch followed by a series of too-bizarre-not-to-laugh antics.  And they gave us some serious inspiration for our next pillow fort.